RemedyBG»Forums
← Back to index
gautam1168
Gaurav Gautam
84 posts
#26772
Breakpoints are not respected if set before the program execution started (in dll's)
2 months, 3 weeks ago Edited by Gaurav Gautam on September 4, 2022, 4:09am

A while ago I posted about having issues with setting breakpoints in remedybg and I stumbled upon the solution while watching a handmade hero stream yesterday. I realized that Casey Muratori almost always sets breakpoints while the game is running, whereas I set the breakpoints before I start the debugging.

I do not know if what I describe below is a bug or intended or if I just plain don't know how to use debuggers. Please tell me which it is.

So here are the steps to reproduce this:

In visual studio both sequence of steps described above lead to the execution being stopped at the breakpoint.

I have also made a video recording of all three of the above sequence of steps if you would like to see me demonstrate the thing I'm talking about:

mrmixer
Simon Anciaux
1260 posts
#26773
Breakpoints are not respected if set before the program execution started (in dll's)
2 months, 3 weeks ago

I just tried it and it's working on my machine. If you use subst to create a "virtual drive" maybe try to open the file using both path to see if one works ?

mmozeiko
Mārtiņš Možeiko
2444 posts / 2 projects
#26775
Breakpoints are not respected if set before the program execution started (in dll's)
2 months, 3 weeks ago

With what version is this? Make sure to try the latest one.

x13pixels
265 posts / 1 project
None
#26776
Breakpoints are not respected if set before the program execution started (in dll's)
2 months, 3 weeks ago

I'm not seeing this either. The video is definitely showing something strange is going on.

One thing to try would be add the breakpoint before the program starts, hit F10 so program stops at the entry point, then take a look at the breakpoint added in handmade.cpp. You should see something like (breakpoint with question mark):

indicating that the breakpoint hasn't yet been resolved (since the game DLL isn't loaded yet). It didn't seem like that was happening in the video. Also, could check the breakpoints pane in RemedyBG to make sure the breakpoint location is as expected (though that probably won't tell us much).

Looks like based on the HH code in the vid you are on around Day 66 or so? Also, what version of RemedyBG are you running?

I will try the steps you mentioned to see if get the question mark on the breakpoint. I will also send you a zip of the executable and the source files Im compiling if you wish, although I have hardcoded the paths to my own computer all over the place so I think you won't be able to compile it without making changes.

Also, I would like to point out that this is not causing me any huge problems. I can still use the debugger just fine, especially after realizing that it works if I put in the breakpoints later.

Using subst drive usually gives more problems that solve it. That's because if you open source file from real location, the debugger won't know if it is the same file as on subst'ed drive - and other way around too. And breakpoints won't work.

I did as you suggested to see if I get the questionmark. But I don't see it. I have made a video again to show how I followed your steps:

You mentioned "I have hardcoded the paths to my own computer all over the place". Do you remember why this was necessary? The HH code should be buildable from any location on disk, right?

If you can email me a patch that I can apply to HH Day 75 I can see if I can reproduce it.

Wondering if handmade.cpp is included somehow in the EXE by mistake? In this case, the breakpoint would get added but wouldn't be code that is actually executed. At the moment, RemedyBG only adds the first resolved breakpoint it finds. If the DLL isn't yet loaded, and code from handmade.cpp is indeed part of the EXE, then it would resolve to that first. Not sure if it will tell us anything but does Visual Studio show two separate breakpoints for that location or just one?

Yes the include is exactly the problem. I do not use the files from the handmade hero preorders directly and instead have been writing them on my own. And I must have missed the part where Casey Muratori removed this include. And also didn't put it together that when its being loaded as a dll, it shouldn't be included: 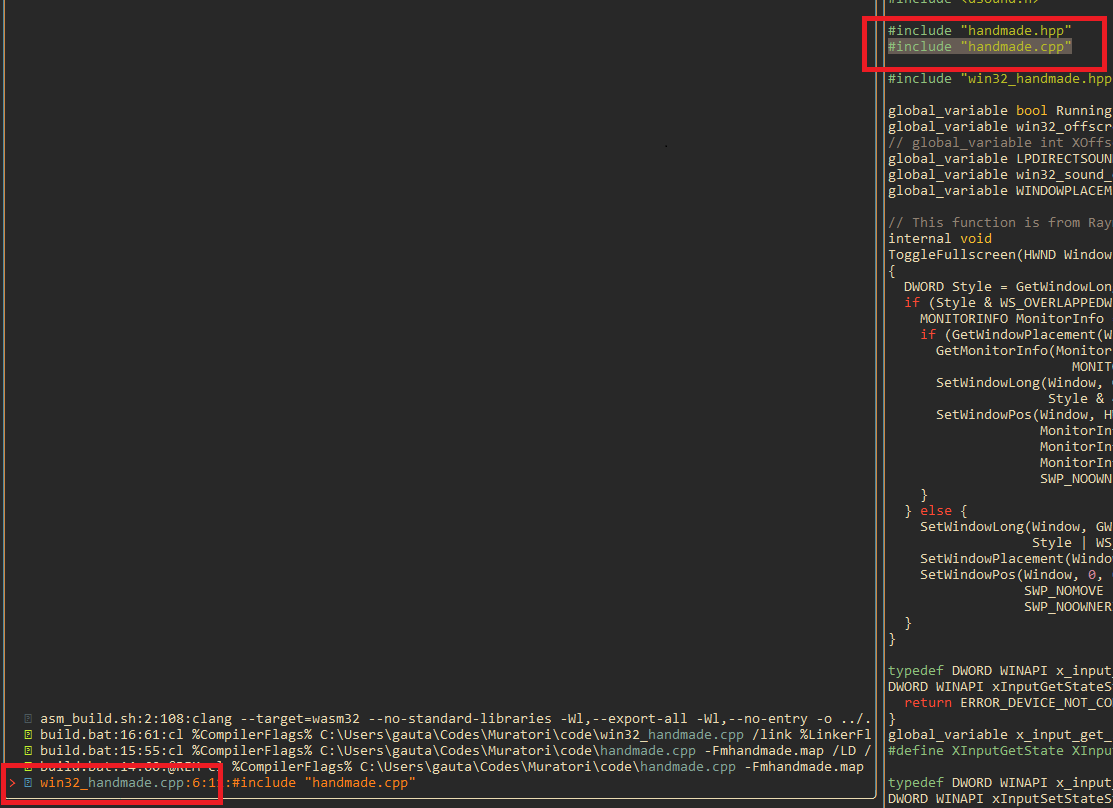 I did not know that debuggers worked like this. Once I removed the handmade.cpp include from win32_handmade.cpp, the breakpoints in handmade.cpp work as expected.

Thankyou for helping me.